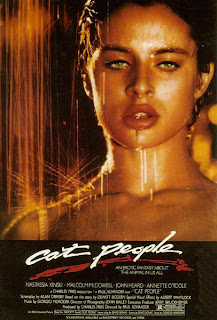 Sometimes, a remake is a useful, even vital component of filmic vernacular, as it is able to delve into or explore an issue or aspect of the original film, that was hindered by the production code. Paul Schrader's Cat People is a film like that, expounding upon the sexual repression and fear implicated in Tourneur's original. In full eroticized mode, Schrader spares no opportunity to have his actors shot mid-coitus, implicating their atavistic primality. Nastassja Kinski is game for the necessity of modernity, the explicit sexualization of the the monstrous feminine.

Like all of Scharder's films, however, other interesting components creep in. The primary villain, or the one trying to turn Kinski, is her brother (Malcolm McDowell). This inclusion is, quite obviously, an allusion to early 80's zeitgeist and fear, of homosexuality and AIDS. The frail, but masculine essence of McDowell's performance communicates this, but it's Scharder's abstract sense of plot mechanism that makes him most effective. It's a strange film, but a pretty great one, on nearly every level. As with all of the 1970's American virtuosos, Schrader commands the frame with utter precision. There will be no knock on his inability to present the material visually. Where one could find fault, is in the resistance the film has to being solely a genre picture. Its suggestion of such themes and the refusal to answer them with an easy conclusion or finitude, is absent. Schrader's never made a film to equal those he penned for Scorsese, but he is an even more esoteric, hard to grasp filmmaker. In a way, it makes him more intriguing, though his desire to not conform whatsoever, relegates his work as more fascinating than excellent.

Posted by Clayton Dillard at 4:21 PM