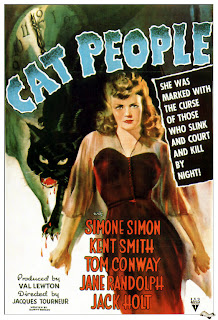 Female sexuality is a dangerous, scary thing. Or, at least, that's the premise of Jacques Tourneur's genre-making masterpiece Cat People, whose Val Lewton produced films of the 1940's helped to solidify horror as the premier venue for allegory. The film is just that; an acerbic assessment of a cultural zeitgeist, holding a fear or concern now thought to be exclusively expressed in film noir. What such genre summarization fails to take notice of, though, is that such labels are applied ex post facto. Phenomenology defies genre or style.

In the case of Cat People, the marvelous directing talents of Tourneur are on full display; any fan of cinematography must begin with his films (ok, Karl Freund is the starting point, but I digress). The compositional intensity is matched by camera moves that only suggest violence and trauma. There's little to none in terms of "scare scenes" in Cat People, though it isn't short on tension. Fashion artist Irena (Simone Simon) is befriended by sexually interested naval construction designer Oliver Reed (Kent Smith). They are eventually married; but she remains reticent about her sexual feelings and desires. Then, when Oliver falls in love with a woman in his office, she becomes jealous, deceitful, fierce. The brilliance of Tourneur's film, which could easily have slipped into clunky misogyny, is that it transcends that trap by making gynophobia not the point, but a subject for thorough examination. Anxiety of female co-workers, sexual equality and revolution, all posed a growing threat to the hegemonic culture. The feline, the feminine figure of the cat, with her clawing, scratching phallic substitute, is the perfect atavistic figure to portray such uncertainty.
Posted by Clayton Dillard at 8:33 PM