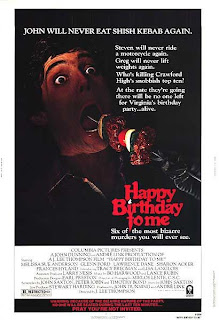 Happy Birthday to Me is something rare; a slasher film helmed by a director at the end of his long, successful career. J. Lee Thompson is man behind films like The Guns of Navarone (1961) and Cape Fear (1962). Gregory Peck once said the he trusted but four directors: Alfred Hitchcock, George Cukor, William Wyler and Thompson. It’s wonderful company to hold and the mark of an experienced filmmaker is on display early in Happy Birthday to Me; fluid camera movements, bits of business for the characters, under rather than overstatement of the material, etc. He even employs the ever reliable Glenn Ford in a small, but significant role. He’s clearly a gifted man. The question becomes, though, is Happy Birthday to Me a significant film because of it.

The simplest answer is no, mainly because Thompson isn’t able to transcend the typical subject matter; some filmmakers can do this. Men like Seijun Suzuki and Douglas Sirk could take what would be trite and uninspired in lesser hands and turn it into something memorable, if not often a masterpiece, in the case of Sirk. Thompson is competent, surely, but not in such a league. He does realize the fun of the genre he’s in, however. After all, in a movie called Happy Birthday to Me, someone’s face must eventually fall into a cake, right? Right. The narrative involves childhood trauma, psychological torment and gruesome murders. All aspersed with a tinge of humor, of course. Excellent death scenes include a weight lifter and his nuts, as well as the infamous shish kebab. The biggest issue here is the circumstances surrounding these scenes. They aren’t very strong. Thompson is at his best when he can indulge the macabre and he’s able to do it just enough, which makes Happy Birthday to Me largely watchable, if only sporadically interesting.

Posted by Clayton Dillard at 8:13 PM