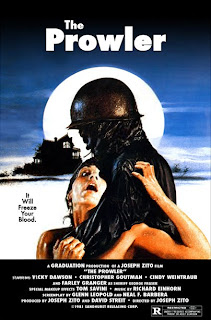 As a slasher film, The Prowler is notable for something rare to the genre; restraint. Not in the sense of gore - there's more than enough to go around. Yet it isn't so concerned with amounting an overwhelming body count. It takes its time, letting characters truly wonder and discover the terror that a madman has wreaked. In this sense, it has a certain degree of sophistication that many of its contemporaries do not. It's interesting, but at times also stagnant to the narrative at hand. The slasher film almost necessitates a zippier tone (unless we're talking a director like John Carpenter, who has the skills necessary to prolong the inevitable without venturing into tedium). Zito is talented too, but he doesn't have near the tricks up his sleeve that Carpenter's Halloween did, so the delay is just that at times.

Nevertheless, the set pieces are amazing. The credits reveal none other than Tom Savini as the man responsible, and one wouldn't have it any other way. There is a top of head through bottom of jaw impaling, two separate shotgun blasts with exit wounds, a slit throat with a 12-inch blade and an exploding head to end all exploding heads. The difference between The Prowler and Eyes of a Stranger
is that the former has a sincerity to it, injected by the soul-baring direction of Zito. The latter is a manufactured studio project meant to capitalize on and exploit those desiring more subversive material. Gruesome, nasty and awesome, The Prowler is well worth the wait.

Posted by Clayton Dillard at 7:46 PM