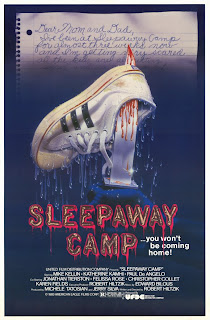 This is the third time I’ve seen Robert Hiltzik’s original slasher and as a friend of mine voiced during its midnight screening, “This movie gets better every time I see it.” I would tend to concur, and it’s because of the film’s rewatchability that I would also tend to say that Sleepaway Camp is actually a good movie, rather than what’s become the college student’s standard response to unconventional acting styles and outrageous dialogue: “That is the best worst movie ever!” Certainly, Sleepaway Camp doesn’t fulfill what are generally accepted norms for realistic acting (see Angela’s stepmother) or seamless continuity (check out the mustache on a cop late in the film). But what it does have (or doesn’t have) is any sense of pretension about its material. The lines are funny because the actors don’t know they’re funny. At least, the characters don’t. One would be foolish to sell director Hiltzik short for his consistently sharp editing, which hilariously juxtaposes unnatural line delivery and reaction to create a truly bizarre, alternative world. It isn’t an accident that everything is played at this ludicrous pitch. And even if one can’t accept that the film knows what it’s doing, there’s no denying that Sleepaway Camp has the greatest last shot/final reveal in all of cinema. 1. Sleepaway Camp. 2. Citizen Kane. That’s right. I went there.

Posted by Clayton Dillard at 7:57 AM