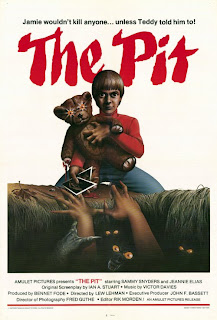 Not quite a children's film, though its lead character is indeed a child, The Pit
would make one hell of a double bill with Spike Jonze's Where the Wild Things Are; they are essentially the same movie. Unable to deal with the lack of attention and care he feels he is entitled to, a young boy lashes out and ventures off to a land where he can be himself. Only in the case of The Pit, the imaginary land and beasts are flesh-feeding demons, who need the boy's teddy bear to telepathically communicate their needs of sustenance.

Ok, so The Pit isn't the endeavor into the psychology of children that Wild Things is. The success of it, though, hinges on the awkward child lead Jamie, played with hilarious incompetence/sincerity by Sammy Snyders. There's a formidable relationship between him and his babysitter, who thinks she's capable of handling the friendless kid. Jamie is curious about the female body and tries to sneak peeks at her while in the shower. His innocent peeking would be harmless if he didn't have a demented teddy bear with ulterior motives. The demons in Jamie's pit ultimately amass an impressive body count, as he draws all of his unliked neighbors/friends to be devoured. The narrative is ultimately inane, but the simplicity of the stupidity is completely charming and The Pit has more than its share of creepy laughs.

Posted by Clayton Dillard at 7:42 PM