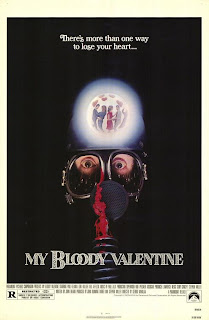 To say that the mantra of My Bloody Valentine would be "Fuck Valentine's Day" probably doesn't quite describe its level of contempt. No, it's hatred runs deeper, pissed off at anything resembling mainstream culture and those who embrace it. It's perfect irony that remake culture now runs rampant, commodifying what was once anarchic. Sure, My Bloody Valentine capitalizes on the holiday hook of forbearers like Black Christmas and Halloween, but it unleashes a killer that doesn't mess around. The avenging, pick-axe swinging miner uses his large, but surprisingly maneuverable phallus without the slightest hesitation. It's a mean-spirited movie. Though it's also a rather funny one, particularly when it lingers on two local lawmen, intent to make sure the killer doesn't strike again. It's at once odd and nasty, with abrupt tonal shifts from scene to scene; but it understands the inherent nihilism of the genre its working from. Rarely does a film that's 'shameless' not ring arrogant or ignorant, but the integration of said humor with horrible, horrible killings makes the viewing experience, at the very least, unique.

Posted by Clayton Dillard at 9:05 PM