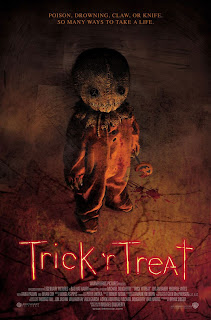 Trick R' Treat opens with a reverse tracking shot, pulling away from an opening close-up on a jack-o-lantern. It's a nice little homage to Carpenter's Halloween, establishing its credibility not through name-dropping dialogue, but filmmaking suggestive of its influences. Unfortunately, it quickly becomes all too clear that Michael Dougherty's debut not only has no further intention of astute references, it isn't interested in creating any cohesive horror film. Essentially an anthology just out of chronological order, the differing stories overlap, but are never totally separated from the others. It's no wonder either, given its jokey tone and occasionally bizarre narrative, that Warner Bros. chose to send this direct to DVD.

It, like all 'too-cool-for-school' hipster flicks, is solely intent on delivering camp and anything associated with it. Good example: A female teenager, who's later revealed to be a werewolf, comments early on that she "ate some bad Mexican earlier." Yeesh. Such poor...taste does not make successful or worthy camp. Other vignettes involve a slaughtered busload of handicapped kids, an old man who hates Halloween and a dad with more than a few secrets. The playful demeanor allows much of the proceedings to run on fairly painlessly, but rarely (or, rather, never) does Trick r' Treat make any kind of lasting impression. It chugs from story to story, the chronology slowly coming into place, then ends. It's worth a few laughs for its intentional inanity, but deserves no praise for taking such a lackadaisical approach.

Posted by Clayton Dillard at 8:36 PM