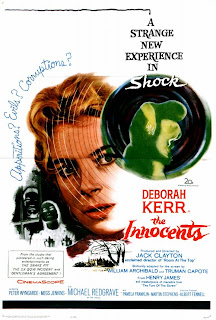 Pauline Kael called Jack Clayton's The Innocents, "The best ghost movie I've ever seen." Kael was right; even 48 years after its initial release, no other ghost film springs to mind that has quite the ability to chill. Based on the Henry James novel "The Turn of the Screw," the narrative involves a governess (Deborah Kerr) of two children who begins to suspect a supernatural presence may be lurking around their Victorian mansion. Filmed in lush black and white by Oscar winning cinematographer Freddie Francis (as well as utilizing the wide frame with its 2.35.1 format), The Innocents gets its scares the hard, but always scarier way; through the mise-en-scene. Long shots of lurking figures, quick cut away's, super-impositions, a child's humming of a nursery song, chiaroscuro. These are the elements that create real horror, not inane and arbitrary music cues and jump scares.

What makes The Innocents so effective, in addition to visual style, are the implications in the relationship between the children and their governess. She loves the children. No, she really loves the children. They are her sole reason for existence. The dynamic between them grows and develops throughout, culminating in a provocative finale. The suggestions made are an acute exploration of the fragile line between maternal care and possession. The wholly developed narrative allows the visuals to carry such weight; like The Exorcist after it, the combination of a strong, slow-burning story with sharp injections of visceral angst make the horror come to fruition. Hardly a drop of blood is split in The Innocents, and it doesn't need it to frighten. Here's a film likely to satisfy scholars and audiences alike. Perhaps that's the truest sense of a classic genre film.

Posted by Clayton Dillard at 7:41 PM