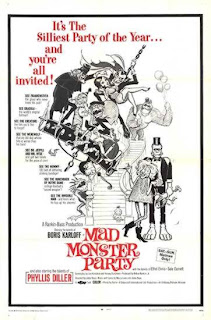 After seeing Where the Wild Things Are this weekend, I was reminded of just how dumbed down children's films have become; here was a movie that didn't have a single pop culture reference and really honed in on the emotional complexity of a child, even if, on the whole, it was a bit too self-satisfied in the process. Here's also a film that demonstrates that a movie made for kids doesn't have to seem as if it was made by them. Mad Monster Party is a decidedly goofy, silly - but entirely intelligent and fun seasonal effort, that could be thouroughly enjoyed by kids, adults and stoners alike.

Baron Boris von Frankenstein (Boris Karloff) is ready to retire from his position as head of the monster council, which includes Dracula, The Invisible Man and The Mummy, among others. The best character in the film, though is Felix Flankin (Allen Swift) the young, outrageously incompetent nephew Frankenstein wishes to follow him. Swift voices Felix like a young, nerdy Jimmy Stewart. Everything he does, in combination with the bizarre stop-motion animation, is absolutely hilarious. It's all derived from his behavior and physical awkwardness, not a half-witted pun or one-liner. The monster stuff is great fun too; if you haven't seen this (which I hadn't until now) don't be put off by it potentially being beneath you. It's not; its acerbic comic touch is utterly sophisticated.

Posted by Clayton Dillard at 5:31 AM