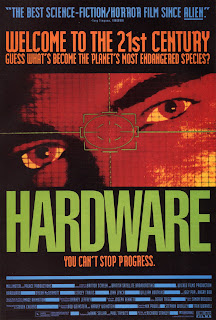 Hardware could just as easily have been titled Hard-on, given its eroticized, slick aesthetic. Set in a post-apocalyptic desert some years into the future, a drifter finds a prototype for a primitive drone, known as the M.A.R.K. 13. Naturally, like in all post-apocalyptic lands, the technology is the villain, intent on killing all humans in its path.

But Hardware, though it may look and present itself as an inspired sci-fi/horror piece, is absolutely derivative of much more substantial films like Blade Runner and Alien. And if being utterly derivative weren't enough, the narrative itself is an utter bore. It establishes this extensive futuristic world (on an impressive low-budget) but injects almost nothing to exacerbate the circumstances. Yet worst of all is the employment of an industrial metal overkill, the music punctuating and serving as a mode of prentension for the hollowed sci-fi discourse. See also the biblical epitaph which begins the film: "No flesh shall be spared." There is a nice death scene involving a potential pervert/rapist, but it comes far too late to even potentially salvage one's interest.

Posted by Clayton Dillard at 6:52 PM