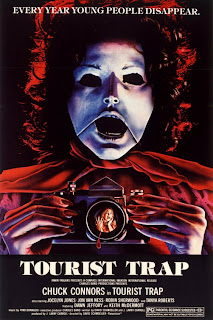 Tourist Trap is most notable for being an early film in the original slasher period (1978-1983). It also has some great death scenes, as when a pipe is flung at a roaming 20's something and the music cuts out; the camera slowly pans down. An audible drip can be heard on the soundtrack. Blood is revealed to be pouring from it, slowly, as the guy screams (unheard) for his life. It's a great scene, purely from a genre perspective.

This definitely isn't a film short on creativity (though its narrative is quite an odd hybrid of The Texas Chansaw Massacre and House of Wax). As in any backwoods story, modern industrialization has affected the socio-economic status and self-esteem of the deranged killer(s). In TCM, "the gun" had replaced good ol' fashioned slaughterhouse head-bashing. Here, the example is a little less gruesome: "Ever since they built that new highway, no one much comes around here anymore." This also rings of Norman Bates explanation in Psycho. Thus, Tourist Trap has more than a few recognizable precursors, which one can usually overlook, but here, the silliness of the story just doesn't allow such fun to commence. I would attribute it precisely to such a hybridization of previous genre works; Tourist Trap is all over the place in terms of tone and intention. Funny, horrible, gruesome - but wholly uneven. Its intentions pull against one another. It ultimately comes off as goofy more than anything else, though Chuck Connors is a pretty formidable psychopath. Fact is, the material is stretched to 90 minutes, when it should have been wrapping up around 70. Length is usually a petty quibble, but here it makes a difference. The contrasting tones, at 70 minutes, wouldn't have been so prevalent, though still present. Tourist Trap is by no means an un-enjoyable film, but it is a severely inconsistent one.

Posted by Clayton Dillard at 5:33 AM