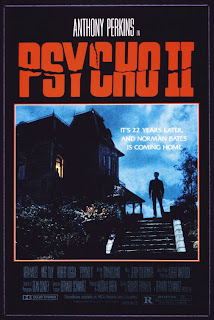 Everything about Psycho II smacks of desperation. Picking up 22 years after the initial murders, Norman (Anthony Perkins) is now all 'growed' up and no longer considered a menace II society; he snags a job at a diner. But, of course, he's still suffering from the same maternal woes. The narrative revolves around Norman and a lonely waitress from the diner (Meg Tilly) who takes pity on poor Normy. Her motives aren't quite as they appear though...

That teaser should in no way suggest Psycho II is worthwhile. Its jokey 'return-of-the-repressed' discourse is a slap in the face to the original. Why do franchises (Friday the 13th and Nightmare on Elm Street are the best examples) always resort to self-effacement in the sequels? What was once serious is now fodder for tired lampooning. It isn't a total loss here; pre-ass baring Dennis Franz has a sleazy role as a drug pushing motel manager. Here's a typical line: "At least my customers have a good time! What do yours get, Bates? Huh? Dead! That's what! Murdered by you, you loony!" But it's the hokey New-Yorker accent which sells it. The biggest problem, though, is how uninspired the direction is. Given the utter lack of creativity in the script, gimme some nice shots, interesting framework, something. If it suddenly seems like you're watching a mid-Sunday afternoon hack-job, you aren't alone. As a horror film, it commits the ultimate fault (though there's many others to speak of): there's nothing at stake. No one, on or behind camera, appears to care. Such a smack of desperation comes when the wallets are bare and the checks have already been signed.

Posted by Clayton Dillard at 2:33 PM