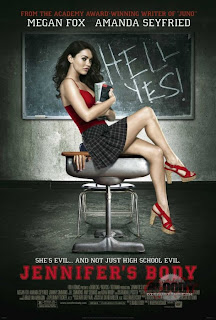 This December will mark 13 years since Wes Craven’s “Scream” was released into North American theaters and it’s safe to say horror hasn’t been the same since. Craven unleashed a clever, but detrimental beast in terms of the perception of horror to the mainstream and that detriment was only exacerbated by the sporadically clever onslaught of “Scary Movie” films, only the first of which was remotely perceptive in deconstructing the pop mores of a pseudo-subversive and goth culture. The ‘rules’ had been laid out. As dear as “Scream” is to me personally, essentially for nostalgic reasons, it precipitated a hurl of smug cynicism towards the genre, especially the impracticality of horror’s plot mechanisms. Horror was now something to laugh at.

This preface is a lead into “Jennifer’s Body,” a film which could have and should have been a further revisionist text in terms of both horror as genre and the monstrous-feminine, and toyed with the state of horror as something to be taken only half seriously or not taken seriously at all. No such luck though, as the sophomore effort script penned by Diablo Cody is first and foremost interested in peppering dialogue with needless, pointless pop referencing and positing high school as a sincerely painful phase of adolescent life, all filtered through her skewered, flesh fetishist perspective.

Cody, though, cannot be blamed for either director Karyn Kusama’s flat, tonally deaf direction or star Megan Fox’s artless turn as flesh-feasting Jennifer. However, it is Cody’s incessantly pestering dialogue that Kusama can’t figure out how to handle, which wrecks any cohesive feel. Yet even Raimi or Romero would be puzzled by Cody, whose idea of being subversive is having Jennifer get impaled by a pole in her stomach, then asking for a tampon. Or when Needy (Amanda Seyfried) asks Jennifer if she’s PMS-ing, she replies “There’s no such thing as PMS Needy. It was just created by the boy run media to explain how crazy we are.” Uh-huh. This is Cody’s game; faux-provocative assertions cloaked in camp or naivety, which might as well just be another useless reference, like when Jennifer figures out she has the ability to heal herself: “That’s some X-Men shit.”

The best part of “Jennifer’s Body” is her ass…I mean Amanda Seyfried, who brings the necessary vulnerability and spunk to counter the soul-crushing (and munching) Jennifer; a few scenes with them, especially one with the two of them alone in her bedroom, feel much more honest than anything else in the film, solely because Seyfried really sells the instantaneous sexual vigor Jennifer casts over anyone she talks to, or even looks at. “Jennifer’s Body” attempts to take high school seriously, however, which must be commended. Not in the laughable “One Tree Hill” sense, but there’s a level of existential beauty at work in a few small exchanges, which momentarily counter the thematic clashing, but the film ultimately never materializes into anything coherent. Even the chronology, which is given a frame narrative, the bulk of it being in flashback, is disorienting rather than poetic and only helps to jumble any semblance of a specific intent or purpose.

Posted by Clayton Dillard at 5:23 AM